Atherosclerotic plaques form in our blood vessels and can rupture, causing deadly heart conditions and diseases. They originate as fatty streaks of low-density lipoproteins (LDLs) on the inner lining of major arteries. A type of white blood cell, known as a macrophage, tries to break down the streaks, but high concentrations of LDLs cause them to die within the blood vessel wall. These dead macrophages become foam cells that accumulate and draw in more macrophages. The smooth muscle cells cover and seal the foam cells with what is known as the fibrous cap. The sealed foam cells break down into a lipid pool referred to as the necrotic core which also includes calcium nodules. The fibrous cap can become quite thin and prone to rupture and is also a source of high-stress concentration. This means that plaques can be unstable and rupture suddenly; causing many serious health issues, often fatal.

The image to the right was taken within a blood vessel afflicted by atherosclerosis and was captured using an intravascular imaging technique known as IVUS. The purple line shows what remains of the blood vessel orifice after a considerable accumulation of plaque. The yellow area indicates the necrotic core. The space between the yellow and purple lines indicates the fibrous cap, containing the necrotic core. Its rupture leads to rapid thrombus formation and can cause one of several cardiac events often resulting in death. The red dotted line shows the outer diameter of the blood vessel. 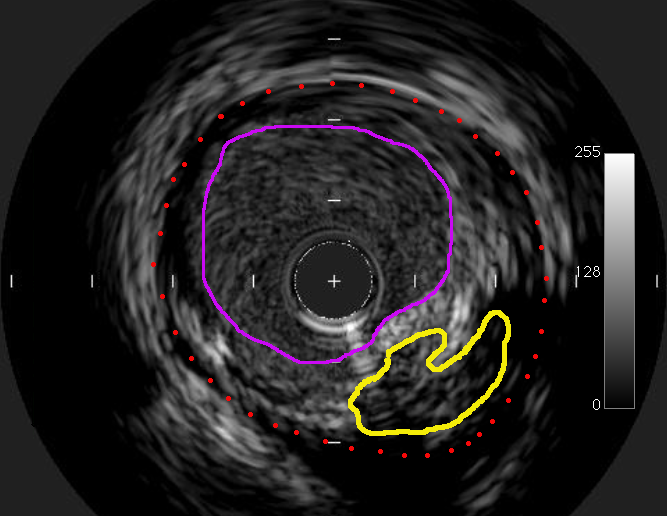 Our research examines the stability of these plaques and the mechanisms that lead to their weakening and rupture. This involves a double-edged study:

We hope to have a better understanding of the biological and mechanical factors that lead to plaque rupture. We have already established a link between heart rate and plaque stability in a previous publication and will continue to help develop solutions and treatments for people affected by plaques and their potential to rupture.